Important New Medicare Card Mailing Update - Wave 6 Ends The Centers for Medicare & Medicaid Services (CMS) finished mailingcards to people with Medicare who live in Waves 1-5 and now Wave 6states (Arizona, Colorado, Idaho, Montana, Nevada, New Mexico, Texas,Utah, Washington and Wyoming). Card mailing in Wave 7 states andterritories continues. If someone with Medicare says they didn't get a card, you should: *    Sign into MyMedicare.gov to see if your CARD was MAILED.  If so,you can print an official card. YOU will need to create an account, ifyou don't already have one.*    Call 1-800-MEDICARE (1-800-633-4227) where they can verify youridentity, check your address, and help you get the new card.      To ensure that people with Medicare continue to get care, health careproviders and suppliers can use either the former Social Securitynumber-based HICN or the new alpha-numeric Medicare BeneficiaryIdentifier (MBI) for all Medicare transactions through December 31,2019.      People with Medicare should continue to protect their new number toprevent medical identity theft and health care fraud, especiallyduring Medicare Open Enrollment. 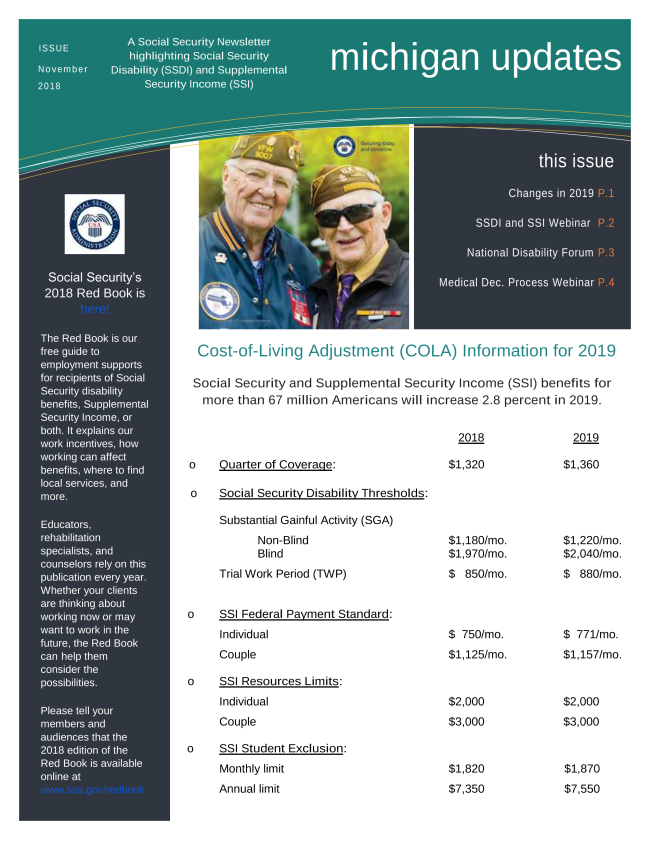 BY PHIL FOLEY 810-452-2616 • [email protected] mihomepaper.com IMLAY CITY — After nearly 50 years of helping the Hispanic community and others in Imlay City, the Hispanic Service Center (HSC) is finally getting a permanent home and is changing its name. On Monday (Aug. 6), HSC board members will gather at Lighthouse Title Group Monday (Aug. 6) afternoon to sign mortgage papers to purchase the former Studio E Photography shop on North Almont Avenue. Board member Margaret Guerra-DeLuca said the name Hispanic Service Center is “something of a misnomer. We help everybody.” She noted that while HSC operates an emergency shelter for families, “we’ve never had a Hispanic family in it.” Mary Jones, who was recently elected president of the HSC Board of Directors, said she recently helped an Albanian restaurant owner from Fowlerville stop his Albanian wife from being deported. Along with moving, HSC is changing its name to Imlay HSC, GuerraDeLuca said, to better reflect its mission of helping anyone in need in Lapeer County. Jones said the new building at 113 N. Almont St. is about half the size of its current location on East Third Street, but owning their own building will allow the group to do things it never has before, like installing a commercial kitchen. Jones added mortgage payments on the 2,088-square-foot building will be less than what Imlay HSC is currently paying in rent. Jones said Imlay HSC would not have been able to put the deal Photo by Phil Foley Hispanic Service Center (HSC) board members Joe DeLuca, Mary Jones, Margaret Guerra-DeLuca, Lourdes Emke, Angie McCoy and Rosa Menedez show off the front of HSC’s new home. Hispanic Service Center set to sign papers for permanent home FANG on page 7A HSC on page 7A together without the help of Lakestone Bank & Trust’s Walt Bargen. Jones said the building had been on the market for $85,000, but they were able to get it for $76,000. She hopes the Imlay HSC will be able to move into its new facility by Sept. 1. The building is nearly move-in ready, though some minor things like repainting the black floor a lighter color, still need to be done. Imlay HSC was founded in 1972 as the Hispanic Service Center by a group of local Catholics and Baptists to meet the needs of Imlay City’s Spanish-speaking population. About 40 percent of Imlay City’s population is of Hispanic descent. Jones said the group formally incorporated as a 501(c)(3) nonprofit in 1986. Jones noted that the HSC is not supported by the Lapeer County Senior Citizens millage. “We get no tax dollars,” she said. Board member Joe DeLuca said that while the new building is smaller, it just means HSC will have to be more efficient. Instead of having separate classroom and socializing space, the new center will have one room doing double duty. But the building will have a larger food pantry. Jones said Edward Neice, the Fowlerville restaurateur she helped, has donated a six-burner commercial stove and a four-bay commercial sink. They plan to convert a portion of the building into a commercial kitchen in the next few months. That, Jones said, will allow the HSC to hold monthly tamale sales to help support the center. Imlay HSC is governed by a nine-member board that includes Jones, Guerra-DeLuca, McCoy, Paul Bermudez, Cathleen Campbell, Amelia Coronado, Dora Shagena and Benita Rendom. Lourdes Emke is the executive director and Rosa Mendez is the senior coordinator. Emke said the group provides social, health, immigration, cultural and advocacy services for all Lapeer County residents. Imlay HSC also provides document translation services.

The HIspanic Service Center is excited and happy to announce the BIG change we will be doing in approximately the next 2 weeks. WE have our very own HOME for the Center. After many years of paying RENT we will have a mortgage and will own our space. 113 N. Almont Ave. Imlay City ,Mi. 48444

Thanks to the hard work of the Board Members, dedicated time and many hours and special meeting, it has become a reality . Many Directors of this non-profit agency had a vision for. As we often say It was not time yet, but NOW IT IS.

This has been a long process , We began to explore the community and buildings available , and our resources for creative financing. Working with our CPA , and Lakestone Bank and setting forth a plan.

We thank Walter J. Bargen at the LAKESTONE Bank,
Our Realtor Ron Dennis for helping to walk us through this amazing and exciting time for the center and its members.

We are a multi-cultural agency here to help the community and Lapeer county.

Thank you one and all for the support and prayers to make this big change happen.

We also thank the owners of the building for working with us, and making this a reality, Mr. and Mrs Wetzel

The Imlay City Hispanic Service Center is the recipient of 2,500 pounds of food from Dole Packaged Foods

Imlay City, MI - March 20, 2018 - When Imlay City HSC volunteer and Rochester College student Michelle Landry nominated Donna Ruppert of The Good Samaritans in April  2017 as someone making a positive impact in her community, she had no idea anything would come of it. "To be honest, I'd completely forgotten about entering until I received the email telling me I was the grand prize winner of the Ray of Sunshine Sweepstakes.  I was in shock", she said, "to find out that not only would Donna Ruppert be recognized for what she does to provide food to members of the Lapeer community, but that part of the prize was Dole Packaged Foods would donate $5,000 and 5,000 pounds of food to the nonprofit and food bank of my choice."

In her essay, Michelle wrote about how Ruppert wanted to expand The Good Samaritans ability to distribute food, but were were in need of a building.  "I admire what Donna and her family have done with their outreach, to run a nonprofit out of your home has to be a hard thing.  I was very happy to donate the $5,000 to The Good Samaritans so they can have a headquarters to work out of.  Having a home base will give them the stability and ability to help more people than they do right now."

As for the 5,000 pounds of food, "The rules said I was supposed to donate it to 'the' food bank of my choice, which probably meant I was supposed to choose 'one' food bank."  Instead, Michelle chose to split the donation between ImlayHSC and The Good Samaritans. "Having volunteered here for a while and seeing bare shelves and the need for food at ImlayHSC, there was no question in my mind about donating a portion of the food donation I had won to them."

The Imlay City Hispanic Service Center thanks Dole Packaged Foods and Michelle Landry for the generous donation of canned and packaged fruit products, but wants the community to know that we need your help.

Over the holidays they have seen a significant increase in requests for food assistance.  Their food levels are low, shelves are bare, and they receive calls daily asking for help.  Resources are critically low.  They need many staple food items, such as soup, peanut butter, canned vegetables, cereal, baby food and formula, and healthy snacks.

If you want to help but aren't sure how or what to donate, please visit their website at: http://www.imlayhsc.org/donate/ or click on the link below for a list of food and non-food items they need for our food bank and homeless shelter.

Remember, no donation is to small to make a large difference.